It looks like you are not using a browser that is fully compatible with XLNTbrain. 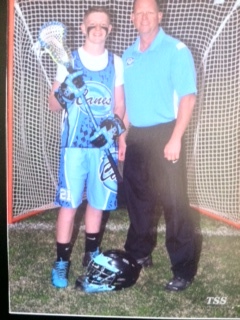 “If they saw what I saw and went through, they would be convinced XLNTbrain a great tool. As a parent and coach, and experiencing how it works and how concussions should be treated, I couldn’t be more pleased. It was like having my own brain doctor on speed dial.”

Randy Stephens says he is “old school” when it comes to toughness on the field. Even as a smaller athlete, he played linebacker in high school and took pride is being able to take a hit and continue playing. Looking back, he remembers numerous times stumbling back to the huddle after a tackle.

Today, however, as a football coach and father, he has a heightened sensitivity to the seriousness to the effects of concussions.

About two years ago, while the rest of the country read headlines about NFL-related lawsuits resulting from brain injury, he met Dr. Harry Kerasidis. Randy asked Dr. Kerasidis to present his concussion findings and educate the coaches within the Huntingtown Youth Football Club in Calvert County with proper concussion care and become acquainted with the XLNTbrain program.

Then, about one year ago, the state of Maryland began mandating that all athletes receive baseline testing. As junior varsity football coach, Randy complied using the XLNTbrain online testing.

“With its online education, XLNTbrain made it a simple process to do the baseline testing and get results online and comply with the state regulations,” Randy said. “It’s extremely user-friendly and because concussions are so important now, it’s a great tool.”

Randy’s 15-year-old son and straight “A” student, Bradley, excels in LaCrosse and plays on the Huntingtown High School’s football team. But Bradley’s playing career, future college scholarship opportunities and academic performance were all in jeopardy due to, not one, but two concussions sustained within 20 days.

On November 1 during the football season, Bradley was invited to play in a special LaCrosse tournament designed for college scouts to observe some of the top players in the state.

During the game, an opposing player cut into the middle to score, leading with his head. Bradley moved to block his path and they collided heads. Despite wearing helmets, Bradley walked off the field dazed and confused, bleeding from a cut. A goose-egg contusion began growing on his forehead.

With the coaches busy, and the tournament organizer’s athletic trainer being unavailable, nobody went to assess Bradley or the opposing player. So Randy, recently trained in concussion signs and symptoms, went to the sideline to speak with Bradley.

“I saw how he walked off the field, but Bradley said he was OK and wanted to get back into the game. ‘Just give me a band-aid and let me back in,’ ” Randy said.

However, within a few minutes, Randy began to notice signs of a possible concussion, and kept Bradley on the bench. As time passed, concussion symptoms appeared, getting worse by the minute. Bradley admitted to a headache, and feeling nauseous.

“I said, you’re done,” Randy said and began the three hour drive home. Bradley’s headache continued along with sensitivity to light, trouble reading and concentrating for a few days. About three days later, his condition showed no improvement, so Randy and his wife decided to report the concussion using the XLNTbrain program, and take Bradley to meet with Dr. Kerasidis.

Within 20 days, Bradley was scoring at the 80% exertion level on the XLNTbrain program (100% exertion level scores are required before an athlete can be tested and receive clearance from a medical professional to return to the contact play.)

Unfortunately, while on his motorcycle and wearing a helmet, Bradley had a minor accident, laying his bike down and falling to the ground, hitting his head.

This time, Bradley’s concussion symptoms showed immediately and more dramatically. His friend reported that Bradley “couldn’t remember anything” and he was asking weird questions.

Randy said his son’s second concussion was more severe immediately, but the symptoms improved the next day. But this experience opened Randy’s eyes to the seriousness of concussions.

“The first time we went through the XLNTbrain protocol, we followed this pretty good,” Randy said. “But the second time, we followed them to a ‘T’ and the program and received the direction, working with us through the whole ordeal.”

Bradley now scores 100% on the XLNTbrain exertion tests, is conditioning with the football team and still getting “A’s” in school. So far, he hasn’t had any dizzy spells or light-headedness.

“Now we’re concerned about his next hit, and if anyone will recognize it,” Randy said. “I hope coaches and team athletic trainers learn about XLNTbrain and concussions, because is the juice worth the squeeze? It’s not. “Dont’ be that dummy. Don’t be that guy that says you rang your bell, get back out there.”

It’s changed my philosophy in sports. You can’t be careful enough when it comes to your kids brain,” he added. “We’re using XLNTbrain. It serves as a virtual doctor, giving parents access to the baseline test results, progress, and guidance with when its safe for their kid to return to the field.”

If given the opportunity to tell all the football coaches in the United States, what would Randy say?

“If they saw what I saw and went through, they would be convinced XLNTbrain a great tool. As a parent and coach, and experiencing how it works and how concussions should be treated, I couldn’t be more pleased. It was like having my own brain doctor on speed dial.”